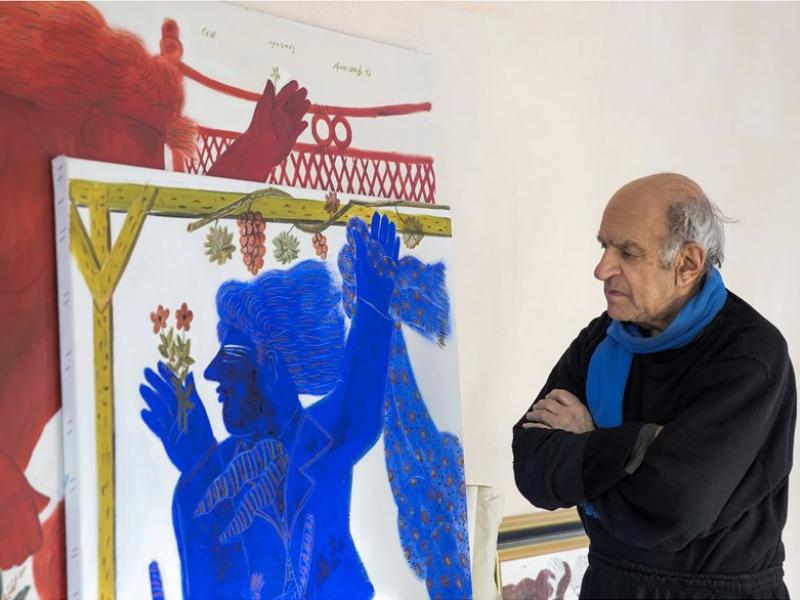 Alekos Fassianos was born in the area of Plaka in Athens. He studied painting at the School of Fine Arts from 1956 to 1960 in the workshop of Giannis Moralis. He studied Ancient Greek Angiography and Byzantine Iconography. He took Lithography classes at Ecole des Beaux-Arts in Paris, with a scholarship from the French government (1962-1964), close to Clairin and Dayez. In 1966 he settled in Paris and since 1974 he has lived and worked in Paris and Athens. Since 1959, the year of his first solo exhibition in Athens, he has held more than seventy solo exhibitions in Athens, Thessaloniki, Paris, Munich, Tokyo, Hamburg, Zurich, Milan, Beirut, Stockholm, London, and elsewhere. He repeatedly participated in group exhibitions and well-known international events around the world. Fassianos was also involved in engraving, poster design, as well as scenography, collaborating mainly with the National Theatre. 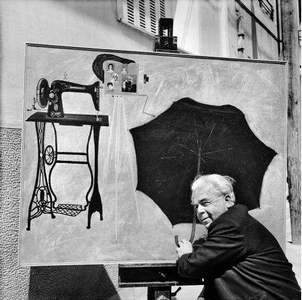 Spyros Vassiliou was one of the most important and popular Greek visual artists. He was mainly a painter, he was also a hagiographer, engraver, set designer, writer-critic, and teacher. His artistic production is characterized by the combination of Byzantine art and the experimentation of the contemporary art scene. Specifically, he moved on the axis of the demand for a return to the roots of Greek art, in order to meet trends of the movements of European modernism, in the way they were perceived by the artistic life in Athens. His works, which depict the natural and urban landscape as well as scenes of social life, describe everyday life with a lyrical and dreamlike mood, combining the scholarly with the folk element and tradition with modernity. 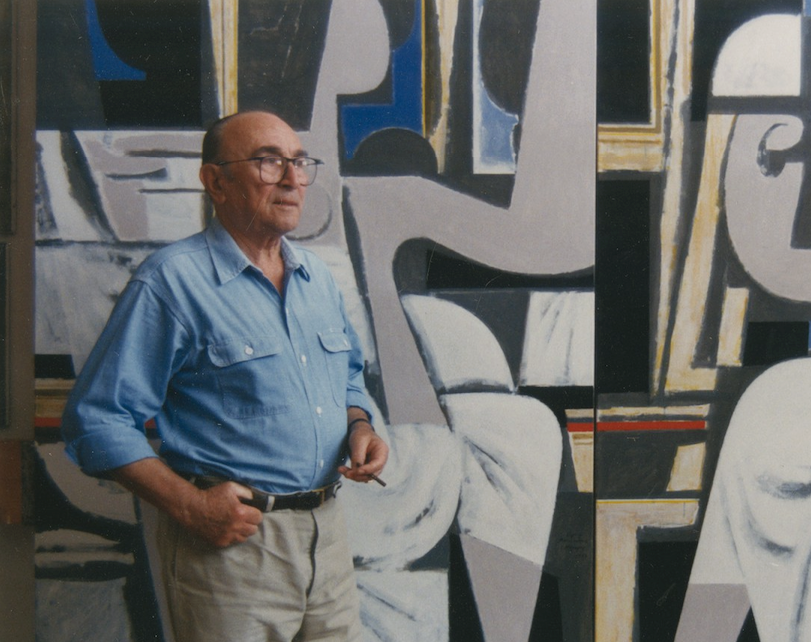 Yannis Moralis was born in Arta in 1916. In 1931, he enrolled in the preparatory section of the Athens School of Fine Arts, where he studied under Dimitrios Geraniotis. Later he studied in the workshops of Konstantinos Parthenis and Umvertos Argyros, and starting in 1933 took classes at Yannis Kefallinos’ Engraving studio. In 1936, the year he graduated, he assured himself a scholarship from the Athens Academy to study Mosaic abroad.

In Paris, he studied Painting at the School of Fine Arts, under Charles Guerin and Ducos de l’Haille. At the same time, he studied at the École des Arts et Metiers, taking lessons in Mosaic. In 1947 he was elected full professor at the preparatory division of the School of Fine Arts and ten years later full professor to the Chair of Painting, a position he remained at until 1983. From 1959 to 1962 he designed and executed the engraved composition on the outer wall of the Hilton Hotel in Athens. He has also been involved with ceramics, illustration, and set design, working for the National Theater, the Greek Ballet, and Karolos Koun’s Art Theater.

He had his first solo show in 1959 at Armos Gallery. He participated in group and international exhibitions among which were the Venice Biennale (1958) and the Tapestry Biennale of Lausanne (1965, 1972). In 1988 there was a retrospective exhibition of his work at the National Gallery followed by the artist making a large donation to the museum. In 1996 the Athens Academy organized an exhibition in his honor. An artist who has had a definitive influence on the field of post-war art in Greece, both with his work in the visual arts and his teaching, he has achieved in painting the yoking of the classical and the modern. He died in 2009 in Athens. 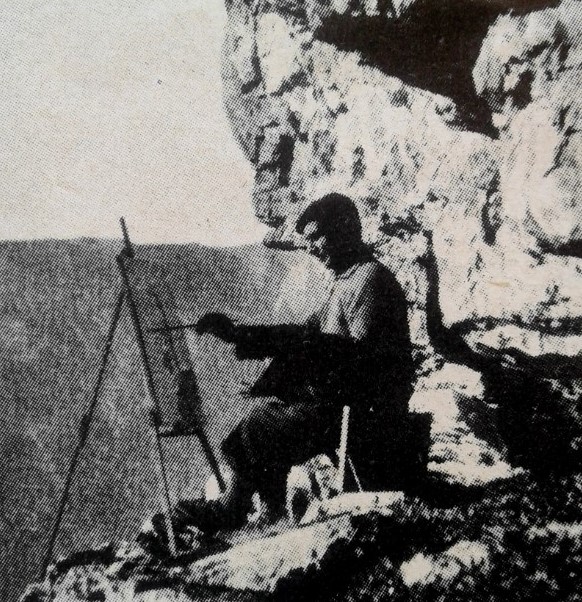 Vassileios Ithakissios was born in Akrotiri, Mytilene, in 1877. His father came from Ithaca, but he married in Mytilene and settled there permanently. Ithaca, however, was an important point of reference in his painting. His real surname was Georganas, but he adopted "Ithakissios" as a tribute to the place where he spent a large part of his life.

He studied at the School of Fine Arts in Athens and completed his studies in Antwerp, Belgium with a scholarship. His art was not included in a particular art movement, although his works can generally be considered neo-impressionist. “ ... Certainly Mount Olympus and its alternating beauty, at all times and in all seasons, is my only inexhaustible source", says Ithakissios. In October 1935, his works depicting various landscapes of Greece (Kefalonia, Kastoria, Skopelos, Skiathos, Meteora, and Navarino) were exhibited in the Parnassos Hall. The Athenian public was fascinated by the special way the painter perceived the beauty of nature, especially the landscapes of Olympus.

For twenty years he chose to stay on Mount Olympus, in a cave, which he named "Asylum of the Muses" and lived there by himself. Ithakissios died in Athens in 1977, a few months after he turned 100. He spent the last years of his life in the Athens Nursing Home, where he donated the paintings left in his possession. The rest of his works can be found in various public galleries and private collections. 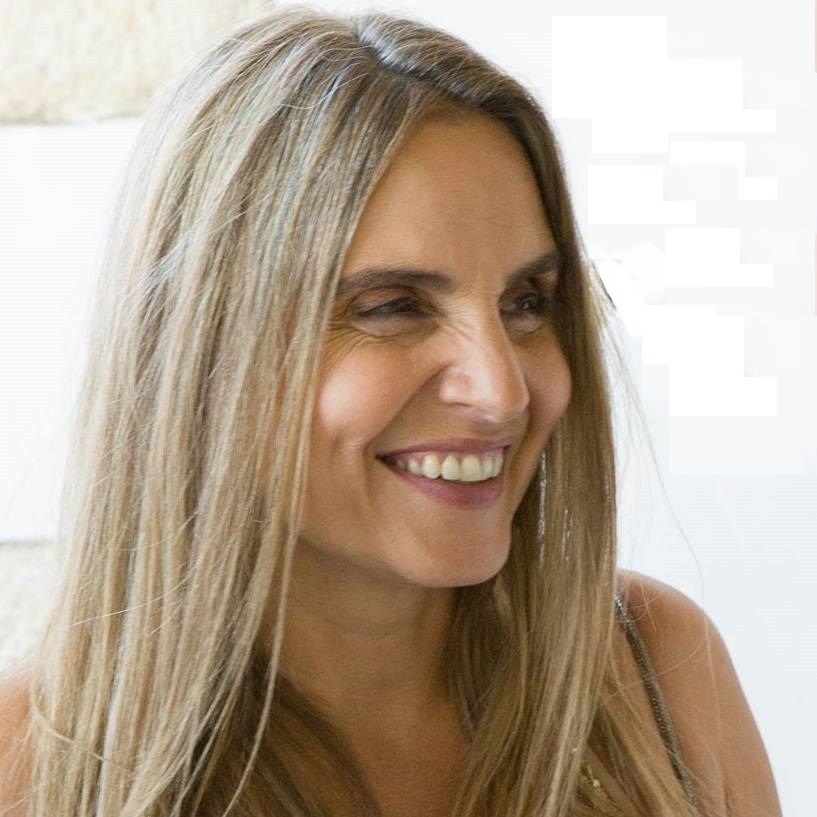 Aglaia Perraki-Xenaki was born in Chania, Crete, where she currently lives. Art is an integral part of her life. It is expressed in various forms of art, painting, and writing. She studied Byzantine Art and the portraits of "Fayum", which were a reference point in her painting creation. In 1998 she studied the Elective Study Programs at the Department of Fine Arts of the Technical University of Crete.

In 2015 she illustrated Aristides Tsaldaris' fairy tale "How I learned to smile" by Fereniki Publications. In 2020 she created the animation "Fewer Inequalities" within the framework of the project " - Alignment with the sustainability goal #10-fewer inequalities, with emphasis on accessibility to sports venues.

In 2021 she illustrated the poetry collection of Aristides Tsaldaris' "Postscript" by Perispomeni Publications. In 2022 her work was selected at INTERBIFER at the International Biennale of Portrait, Tuzla, and won the first Audience Award. In 2022 she was awarded by the Association of Cretan Scientists and the Association of Friends of Classical Music and Opera along with internationally distinguished scientists and artists of Crete.

Her works can be found in museums, private collections, and churches in Greece and abroad. 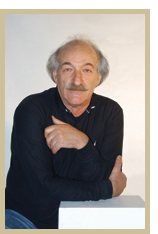 Angelos Panagiotidis was born in Amphilochia in 1950.

He held his first exhibition at his studio in 1990 after twenty years of experimenting with all the different metals used in sculpture. He also dedicated much study to the natural world, particularly the structure and forms of trees. His profound knowledge of his materials, acquired over these many years of study, led him to create tree sculptures that hardly seem made by the human hand. Now, after a series of exhibitions commencing in 1995, they are not only instantly recognizable but have come to be seen as classic representations of the tree in sculpture.

With his artworks have been honored the Olympic Champions: Pyrros Dimas and Nikos Kaklamanakis, as well as the former chairman of parliament Apostolos Kaklamanis & Anna Psarouda-Benaki and the Greek National Polo Women's Team. During the Olympic Games of Athens 2004, gold olive wreaths were awarded to all three of the first Olympic Champions of the Marathon. The same wreath was given to the Slovak Matanin Marcel, whose entrance to the Panathenaiko  Stadium became a symbol of the end of the Games in Athens. 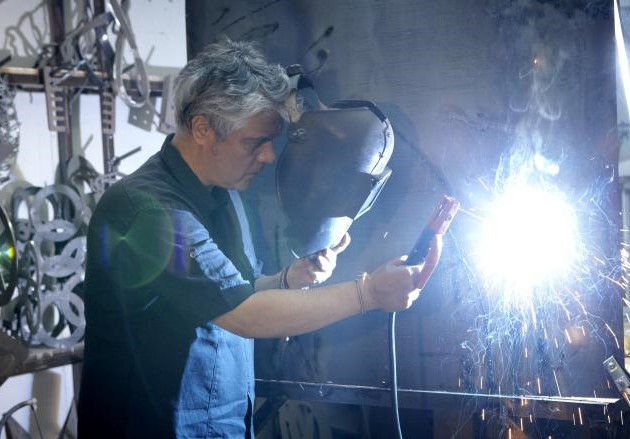 Nikos-Yorgos Papoutsidis lives and works in Athens, Greece. He studied Environmental Architecture and Art at Bournemouth College of Art and Technology in England. He was a certified member of the Society of Industrial Artists and Designers in England where he was awarded the Minerva Award.

He invented the "irongraph" a kind of art where painting and sculpture form a unique artwork on an iron plate. He has designed types of letters and compositions with words and he has written Visual Poetry. He created the Poem - Object, a kind of art that combines Images and words. He has designed medals, prizes, jewelry, record covers, posters, and outdoor banners. Fashion designers have used symbols and designs from his themes as motifs for their fabric designs. He publishes short stories from time to time in magazines and newspapers.
His sculptures are permanently exhibited at the Athens Town Hall, at the Intellectual Center of the Municipality of Athens, at the Technopolis in Gazi, and in private collections in Greece and abroad. He has worked for the Athens Concert Hall and for the "Eleftherios Venizelos" Athens International Airport.